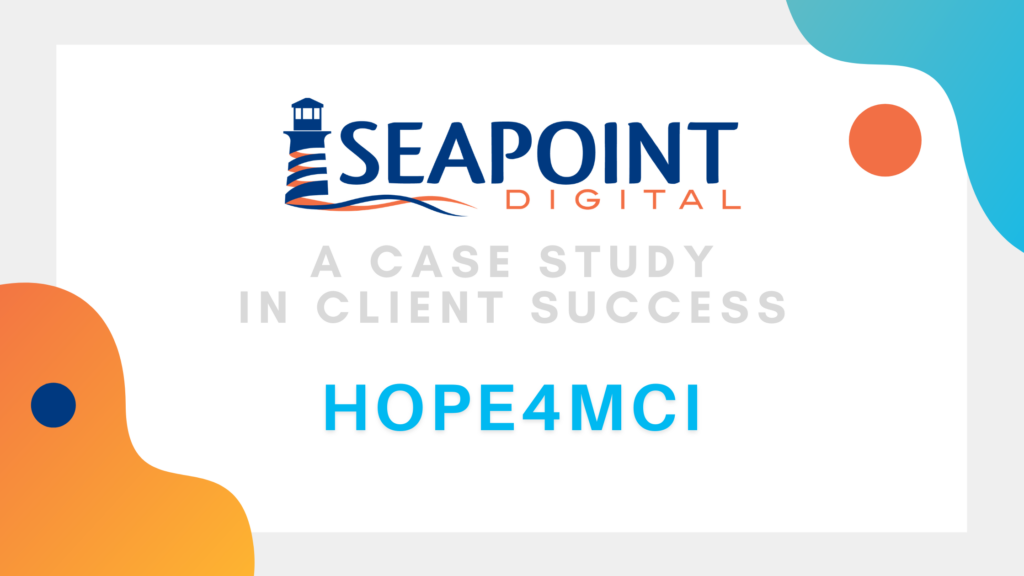 Clinical research for a treatment to bring relief from the devastating effects of dementia caused by Alzheimer’s Disease is, for many, a race against time. With seemingly infinite resources, large pharmaceutical companies can accomplish much. But privately held pharmaceutical researchers do not have those luxuries. With little time, and a very modest budget, Hope4MCI needed to aggressively publicize an upcoming clinical trial that had the potential to change the prognosis of those afflicted by Alzheimer’s. Seeing both a challenge and an opportunity to make a difference, Seapoint Digital took on the task of marketing the clinical trial.

Hope4MCI is a public-private partnership between AgeneBio, the National Institute on Aging (NIH), and Johns Hopkins University. Hope4MCI was ready to conduct a clinical trial of the investigational medication AGB101. The purpose of the Phase 3 clinical trial was to determine whether AGB101 is safe and effective in slowing the progression of the symptoms associated with Mild Cognitive Impairment (MCI), as well as the prevention or delay of the onset of Alzheimer’s Disease dementia. The researchers were posed to begin the study, but they only had one opportunity to complete the trial successfully during the allotted time frame.

Hope4MCI collaborated with the public relations firm Acadia Co to publicize the study and search out participants. Acadia reached out to Seapoint Digital in order to use digital marketing tactics to find and secure participants.  After learning about the nature of the AGB101 trial and its potential impact on those who are diagnosed with Alzheimer’s Disease, Seapoint Digital offered to assist without charge.

The participants would be drawn from a wide range of geographic locations. Testing centers were set up in twelve cities across the United States, as well as Toronto, Canada. Having a wide geographic area would bring more accurate trial results, but it also posed a marketing challenge. Since the trial would be administered at several independent clinics, participants would need to contact these clinics directly. The challenge would be in having one cohesive online campaign that would direct respondents to the correct participating clinic in their specific location.

Efficient timing was vital. The trial was set to begin 9 weeks from inception. All participants would have to be identified and assessed for qualification before the start of the trial. Because of the medical nature of the study, additional approvals would add additional steps and red tape. All ad copy and images would need to pass medical board compliance, as well as Google compliance. Both the Medical board and Google must give approval before any outreach could begin.

With such a short window of time to work with, Seapoint Digital decided to expedite the process and broadcast on the top online advertising platforms: Google, Facebook, Twitter, and YouTube.

Seapoint implemented targeted ads on Facebook and Google that focused on individuals between the ages of 34 and 65+ who lived within a specified mile radius of each testing center.  The distance was tailored to each testing center city’s geography.  For example, the Facebook ads for the New Jersey location included individuals who had posted about an interest in Alzheimer’s awareness organizations, as well as employers of organizations associated with Alzheimer’s Disease.

Both Google search and display ad campaigns were built for each of the location sites.  The Google ads targeted individuals who had recently searched for “early signs of dementia,” “symptoms of Alzheimer’s,” “Alzheimer clinical trial,” and variations of these terms.

The creative team at Seapoint constructed a variety of headlines and copy to use in the ads. Google’s responsive search feature used these to automatically optimize the copy based on live performance during the course of the campaign.

The team also crafted the ad copy to ensure that the would-be participants were not just interested in the trial, but also informed about the proper qualifications.  This would save funds for the client by avoiding excessive clicks, and would also save them time so that testing centers would have higher-quality participants to interview and examine.

Each testing center location needed its own way of outreach and contact for the ad campaign in their area. Seapoint knew an effective solution: create a custom landing page for each campaign’s geographic area. Believing in the value of the campaign, and knowing from experience that HubSpot’s suite of tools would be effective, Seapoint Digital reached out to the HubSpot team and informed them of the clinical trial and the situation that Hope4MCI found itself in. After they learned about the campaign from Seapoint, HubSpot showed their support by providing their software at a substantial discount for the limited amount of time that the campaign would require.

Because each landing page was automated, each prospect was contacted immediately with a validating response, and each testing center was immediately notified so they could quickly and effectively follow up on interest. Seapoint’s strategy led to a high conversion rate that would have otherwise been very difficult to achieve in the time frame given.

At the time Seapoint Digital came onboard, there was an extremely limited time for the creative team to write copy, design graphics, and execute video production. Additionally, all creative assets needed to be approved by the appropriate compliance teams. The creative team focused intently on understanding the project and worked effectively with Hope4MCI for minor adjustments to the creative. Because of this, Seapoint was able to begin the project, complete production, and receive compliance approval in a single week.

All ads successfully passed compliance and were live on the target start date.  Over 10,800 individuals clicked to view more information on the landing pages.  Of those individuals, 195 (1.8%) went on to complete the submission form that was evaluated at each testing site.  The campaign was on a trajectory to reach and exceed the goal of 300 conversions before the trial start date.

“We brought Seapoint [Digital] in at the last minute to execute on a short-term, highly targeted digital advertising project with tight deadlines and we couldn’t recommend them more. They quickly got up to speed in a highly regulated industry, providing expert advice and creative solutions to the challenges we faced, which included strict compliance requirements and multiple internal and external dependencies, to build out a customized infrastructure to capture and retain more users. Site traffic has increased over 35,000% month-over-month (that’s not a typo)! They also had excellent suggestions about how to improve existing pathways to create a clear path to conversion on the website. Their team has been incredibly helpful throughout the process, going out of their way to support our work and to take time to educate us on the process.”

Although Hope4MCI projected that 300 respondents would be required to yield the 30 qualifying participants, the ads were targeted so effectively that all participants were secured after only 150 forms had been completed.  This brought tremendous savings in both time and money.  The campaign concluded with half of the marketing budget remaining.

Additionally, because the campaign concluded many days before the 9 week deadline, the testing sites had ample time to confirm that each of the 30 respondents did, in fact, qualify for the trial before the start date.

The Hope4MCI clinical trial of AGB101 was able to maintain its sponsorship because it obtained its needed participants, and has continued in its noble effort to relieve Alzheimer’s patients of their debilitating symptoms.

We at Seapoint Digital are very proud to have been able to play a small part in this big step forward.

We would love to talk to you about an effective marketing strategy solution for your business.

Fill out the form below and we'll be in touch.

Read more of my posts.

How Can We Help?